You are here: Home / Cats/Dogs / Hypothyroid dogs classically are overweight and tend to be inactive. 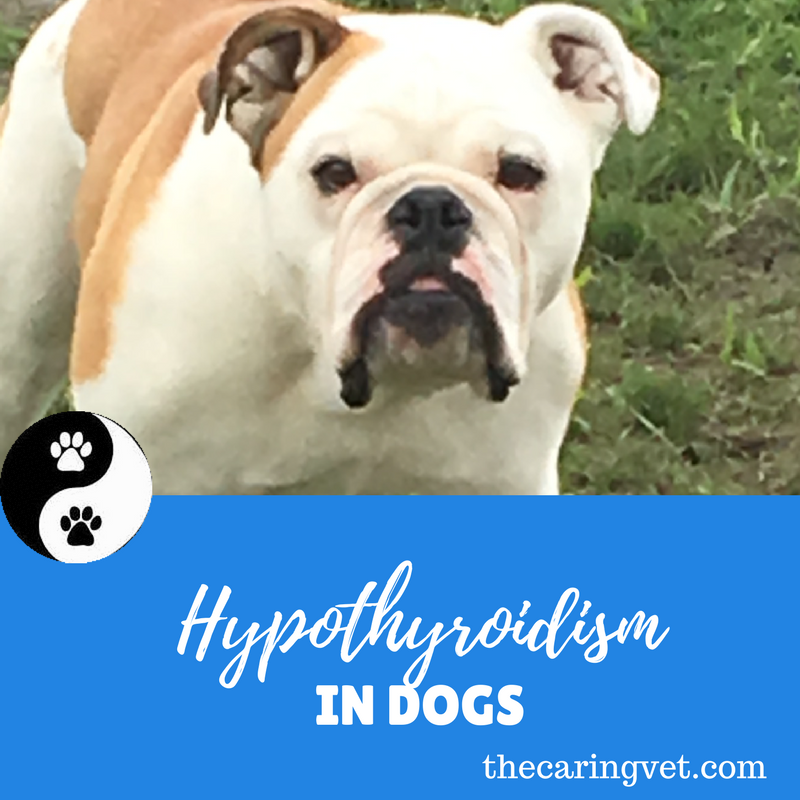 Hypothyroid dogs classically are overweight and tend to be inactive.  But the condition often goes undiagnosed.  Here’s more:

Hypothyroidism DEFINED.
Hypothyroidism is the condition where one has inadequate active thyroid hormone. It is a common human ailment and is also the most common hormone imbalance of dogs.

The Solution Isn’t So Simple.
It seems like hypothyroidism would be a straight forward problem: the body does not produce enough thyroid hormone, disease results, a test shows thyroid hormone level is low, additional hormone is taken as a pill, problem solved. Unfortunately, the situation is not quite so straight-forward in real life. Here we review the issues relevant to this condition and the pitfalls that keep it from being a simple problem.

What is the Thyroid Gland and What does it do?

The dog’s thyroid glands are located on either side of the windpipe (trachea). It produces two forms of thyroid hormone: T3, which is the active form of the hormone, and T4, which is the inactive form created to circulate in the bloodstream. When T4 is absorbed into tissue cells, it is converted into T3. Most of the circulating T4 is carried by blood proteins and is not available for tissue absorption; the portion that is not carried by proteins (the so-called “free T4”) is the portion that is able to enter tissues for activation. The thyroid gland itself can also activate T4 into T3. In dogs, about half of the T3 comes from the thyroid gland and the remaining half comes from the body’s other tissues. In humans, 80% of T3 comes from activation in the body’s other tissues.

Production of T4 is regulated by the pituitary gland at the base of the brain. (This gland is called the master gland as it regulates hormone production in the adrenal system, the thyroid system, the reproductive system, and more). The pituitary produces a substance called TSH, which stands for thyroid stimulating hormone. When T4 levels are dropping, the pituitary gland stimulates the thyroid gland to make and release more T4.

Hypothyroidism generally develops in middle aged or elderly dogs. Breeds with definite predisposition to develop hypothyroidism include: the Doberman pinscher, the golden retriever, the Irish setter, the Great Dane, the dachshund, and the boxer.

Hypothyroidism is a classical disease with a classical collection of clinical signs. One particularly well-published survey of 162 confirmed hypothyroid dogs showed the following common findings:

Cardiovascular Signs
Hypothyroidism interferes with the electrical fibers that more or less provide the wiring for the heart. The rhythmic contractions of heart muscle are normally stimulated by these electrochemical fibers. Abnormal rhythms or slow heart rate occur in as many as 26% of hypothyroid dogs; still, the significance of this in terms of overall lifestyle is not clear. Many specialists feel thyroid supplementation should be started at a lower dose for patients with obvious heart disease.

A hypothyroid dog’s eye may show a white “crescent” of corneal dystrophy.

Ocular changes are not common in hypothyroidism but the high levels of blood cholesterol and circulating fat can sometimes lead to eye changes. When these changes are seen, often thyroid testing is recommended. Corneal dystrophy, an abnormal change in the clear covering of the eye, is such a sign. This finding is usually represented as a small white spot (sometimes a white circle) on the eye surface. At this degree it is only a cosmetic problem and does not interfere with vision. In more severe forms, painful bubbles can erupt on the corneal surface, leading to ulceration. Obviously, this form would require treatment.

Conditions not proven (but previously suspected) to be associated with hypothyroidism are: megaesophagus, laryngeal paralysis, infertility, and behavioral aggression.

You would think testing for hypothyroidism would be simple: a blood test of the T3 or T4 level could be checked and if it is low, the patient is hypothyroid. Unfortunately, the situation is rarely so simple.

Measurement of T3
If T3 is the active hormone, why can’t we just test blood levels of T3? Due to assorted compensatory mechanisms, T3 levels often fluctuate into the normal range in even truly hypothyroid dogs. This means that T3 values are virtually useless in diagnosing hypothyroidism.

Measurement of T4
The T4 level (also called the total T4 level) is measured commonly and is included in many routine screening blood panels. It would seem that a low T4 would indicate hypothyroidism and a normal T4 would indicate normal thyroid function. Unfortunately, it isn’t that simple. Dogs taking certain drugs (most notably seizure medications phenobarbitaland potassium bromide; prednisoneor other corticosteroids; non-steroidal anti-inflammatory drugs; the heart medication propranolol; the behavior drug clomipramine; or sulfa class antibiotics) or with illnesses other than thyroid disease often have depressed T4 secretion. These dogs will have low T4 levels but are not hypothyroid. This means a normal T4 indicates normal thyroid function but a low T4 may or may not indicate hypothyroidism. There is also a grey zone where T4 results are considered not definitively normal and not definitively abnormal. In short, T4 alone is not adequate to make a diagnosis of hypothyroidism.

Free T4
As mentioned, T4 is the precursor hormone that is not active but is converted by body tissues into T3, which is active. T4 exists in two forms: the form that is carried around bonded to a blood protein (this is called bound T4) and T4 floating around loose in the bloodstream (called free T4). Only free T4 can enter cells and be converted to T3 and the concentration of free T4 corresponds to thyroid hormone activity where it counts (i.e. at the tissue level). Free T4 levels are less subject to fluctuate into a falsely low range in response to non-thyroidal diseases or drugs than is a total T4 level.

TSH Stimulation and Endogenous TSH levels
Before there was readily available equilibrium dialysis free T4, the test that was felt to be the gold standard of reliability was called the TSH stimulation test. In this test, a T4 was measured and then compared with a value drawn 8 hours after administration of an injection of thyroid stimulating hormone (TSH). Inability to respond to TSH was considered indicative of hypothyroidism. The problem was expense, the need for 8 hours of hospitalization, and the fact that injectable TSH was frequently off the market. This test is rarely performed nowadays.

TSH can be directly measured in a patient’s bloodstream. The idea is that the pituitary gland should be secreting high levels of TSH in a futile attempt to stimulate a diseased thyroid gland. Measurement of TSH level is an important means of diagnosing hypothyroidism in humans and a canine version of the test was long sought. Unfortunately, when it finally became available, it was found that many dogs (approximately 25%) with true hypothyroidism did not have elevated TSH levels as one would expect; still, this test is often helpful in making the diagnosis of hypothyroidism.

Antithyroglobulin Antibodies (The TGAA test)
Some thyroid testing panels include a measurement of antibodies against the thyroid gland proteins from which thyroid hormones are made. The presence of these antibodies confirms the immune-mediated form of hypothyroidism (though in later stages of this disease, antibodies are no longer produced). The only significance of this test, other than academic interest, is to identify patients that are positive for antibodies yet have normal thyroid hormone tests. These animals have a 20% chance of becoming hypothyroid later on, so regular periodic testing of thyroid hormone levels would be a good idea. Treatment of hypothyroid animals that are positive for antibodies is the same as treatment for that that are antibody negative; the only practical use of the test is to identify animals at risk for becoming hypothyroid later on.

Testing with a Trial of Medication
Sometimes the only way to test for hypothyroidism is to simply administer the medication for several months and see what happens. Often an improvement in attitude and energy level is seen within the first week. Hair re-growth takes substantially longer (typically 4 months minimum) as the follicles must reawaken and then grow hair long enough to create a visible coat change.

At least treatment of hypothyroidism is relatively straight forward; hypothyroidism is treated with oral administration of thyroid hormone (T4). Even hypothyroid dogs are perfectly capable of converting T4 to T3. Pills are given usually twice daily to start but may be dropped to once a day after good thyroid control has been achieved.

There are many brands of thyroid supplementation available and prices are somewhat variable depending on the manufacturer.

IMPORTANT NOTE: TREATMENT IS FOR THE LIFE OF THE DOG

Occasionally we are asked if it is reasonable to use dried or powdered thyroid glands of hogs or cattle as a more “natural” form of treatment. The answer is simply no. These products are not produced with adequate quality control to ensure that they contain a reliable amount of thyroid hormone. Each dose may be completely different when such a product is used.

Re-testing later on
Whenever an animal goes on a medication long term, periodic blood testing is a good idea. In the case of hypothyroidism treatment, it is important to know if the medication dose is too low or too high. Thyroxine (T4) is a safe medication but if it is not given in adequate doses, obviously the patient will not be adequately treated. If the dose is too high and given for too long a time, excessive water consumption, weight loss, and restlessness can result.

Monitoring with TSH level
The canine thyroid stimulating hormone level (abbreviated cTSH) does not seem to require any particular timing issues and can be run on a blood sample taken any time of the day. The cTSH level will not indicate whether or not the thyroid dose is too high but is quite accurate at determining if the level is too low. (Inadequate treatment is associated with high TSH levels indicating that the pituitary gland is vainly trying to stimulate the thyroid gland with high levels of stimulating hormone). This test may be run instead of or in addition to a T4 level when it comes time to monitor thyroid hormone treatment.

Make Sure the Diagnosis Correct.

Because of difficulties in diagnostic testing methods, many dogs have been erroneously diagnosed with hypothyroidism and have been on medication for years. If there is any question about a patient and one wishes to re-test, thyroid hormone supplementation must be discontinued at least 2 months for blood testing to be valid. If possible, medications known to interfere with testing should be discontinued for testing (though this is obviously not always possible).

More from my site